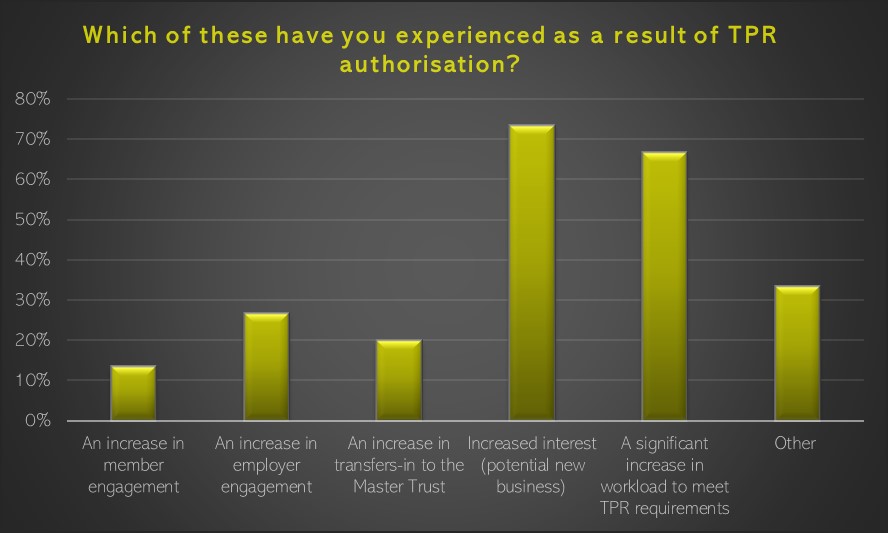 In our latest survey of the Master Trust market we looked at Master Trusts’ experiences of The Pensions Regulator’s (TPR) authorisation and the ongoing supervision regime.

A modest number of respondents felt the authorisation process itself was in line with expectations. However, over 85% felt the process was intense, with 40% reporting that the work involved was more intense than expected. This is underlined by another question we asked around the effort involved in applying for authorisation. The average number of person days taken up working on authorisation was reported as around 540. It is therefore perhaps not surprising that many Master Trusts sought an extension to their authorisation deadline.

Despite the significant amount of work involved, two-thirds of Master Trusts see the new regime as a necessary burden.

There was some feeling that that the new regime could have more emphasis on how Master Trusts are seeking to improve member outcomes. However, in most cases, responses supported our view that this is a more appropriate and robust regime than that of the FCA.

It is encouraging to note that many respondents have seen an increase in employer and member engagement since TPR authorisation.

TPRs’ new regime also seems to have created some positive publicity for Master Trusts. Almost 75% of respondents reported increased interest from potential new business since the new regime came into effect. Master Trusts must surely have scaled up to service their new clients along with the significant increase in workload to meet TPR requirements noted by two-thirds of respondents!

Whilst clearly TPR authorisation was challenging for Master Trusts, it’s a positive move for the industry to see a (high bar) minimum standard has been set. TPR says they will take a risk-based approach to supervision. It certainly feels like supervision is expected to be much more straightforward than the initial authorisation. What becomes interesting now is how one differentiates between a pool of Master Trusts that already meets a required standard. Our view is that Trust governance models is one of the differentiators. In support of this, respondents tell us anecdotally that discussions with advisors about governance are more commonplace since authorisation. A reminder of something that employers and ceding Trustees should closely consider during the Master Trust selection processes.

This website uses cookies to improve your experience while you navigate through the website. Out of these, the cookies that are categorized as necessary are stored on your browser as they are essential for the working of basic functionalities of the website. We also use third-party cookies that help us analyze and understand how you use this website. These cookies will be stored in your browser only with your consent. You also have the option to opt-out of these cookies. But opting out of some of these cookies may affect your browsing experience.
Necessary Always Enabled
Necessary cookies are absolutely essential for the website to function properly. This category only includes cookies that ensures basic functionalities and security features of the website. These cookies do not store any personal information.
Non-necessary
Any cookies that may not be particularly necessary for the website to function and is used specifically to collect user personal data via analytics, ads, other embedded contents are termed as non-necessary cookies. It is mandatory to procure user consent prior to running these cookies on your website.
SAVE & ACCEPT